We’d be happy to answer any questions you have regarding Finch Media. Please feel free to contact us at:

What happens when a CEO uses the Corporate Social Media account to express political views?

I have been watching the fall-out from the Michael McCain Twitter thread on the Flight 752 Ukrainian plane crash with some interest. To be honest, my jaw dropped when I originally saw the posts. I immediately did background research to ensure these were legitimate, not faked.

On January 12th, using the Maple Leaf Food’s Twitter feed CEO Michael McCain spoke out about his anger around the Ukrainian jetliner crash and mourned the loss of a Maple Leaf Food’s colleague’s wife and 11-year old son. In the Twitter thread he made it clear that he partially blames the US and the President for the crash. To read more, visit here. 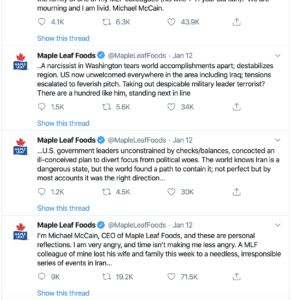 It is very unusual for a CEO of such a large company to post such a personal message, especially to do so on a public company social media Twitter feed. The posts are very raw and sincere, similar to the very personal video message that McCain was given credit for during the Maple Leaf foods listeria crisis.

While never naming Trump, McCain demonstrates he’s not a fan of the sitting US President – again it is very unusual for a CEO of a large company to publicly share such politically divisive comments. 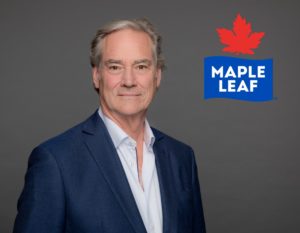 After closely monitoring this, I believe these actions will result in a net positive for Maple Leaf Foods since many Canadians share Michael McCain’s viewpoint. The country is grieving the loss of so many Canadian lives and many disapprove of the current US President’s policies.

At the time of writing this article, the post had received 70,000 likes and been shared 19,000 times. On Sunday night before the posts, Maple Leaf Foods had less than 1,000 followers and now they have almost 6,500 and that number is growing.

Of course, there has been some blowback. A boycott Maple Leaf Foods hashtag has also started, however, mostly the company has been getting a lot of support both online and in the media. At a glance, it looks like Maple Leaf Foods’ may lose some customers in the short-term, but the customers who stay will likely become more loyal.

The general consensus in marketing right now is that it’s getting harder for companies to remain neutral in political debates – consumers feel that not taking a stand is worse than taking one. Companies are being pulled into the issues, whether they like it or not. Whereas companies used to avoid commenting on political issues, today customers are wanting to purchase from companies that they believe align with their values.

After such a bold move, it will be interesting to see if we start seeing more CEOs taking over their corporate Twitter feed in such a personal way or if this was a one-off. Only time will tell, and this will likely be influenced by the public’s reaction over the coming week.